how thin the needle 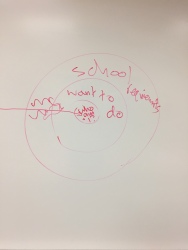 I’ve nothing to say about the election this morning. But I do have something to say – and down deep, that’s all it’s about, terrifyingly.

I’ve been rereading Ta-Nehesi Coates’ Between the World and Me as I teach it. A book about so much – but this time for me, it’s a book about education. About how transformational school can be, but only under certain circumstances. Under anything other than those circumstances, it is the opposite of transformational. Monstrous, hideous.

Coates is talking about how he spent most of his time at Howard University  in the library, taking his own unique advantage of the largest collection of African and African-American thought in the country:

I followed a simple ritual. I would walk into the Moorland Reading Room and fill out three call slips for three different works. I would take a seat at one of these long tables. I would draw out my pen and one of my black-and-white composition books. I would open the books and read, while filling my composition books with notes on my reading, new vocabulary words, and sentences of my own invention. I would arrive in the morning and request, three call slips at a time, the works of every writer I had heard spoken of in classrooms or out on the Yard: Larry Neal, Eric Williams, George Padmore, Sonia Sanchez …

My two year-old stole my book out of my bag, so I can’t get the rest of the quote. But I think you get the picture: a solitary man at a reading room table, day after day, working his way through the complete intellectual history of his own identity.

There’s a few aspects of this that seem urgent to notice. Certainly for any teacher; probably for anyone trying to figure out how somebody becomes passionate and well-informed, rather than bored and ill-informed.

That’s the question that drives him, and he eventually despairs of finding the coherent answer. He abandons his orthodox thinking (like Malcolm before him) – aided in this last, apparently, by a few professors, who were ready with patient Socratic probing that allowed him to temper his passion for absolutes into a reality-based despair that, truly, leads to the writing of this book. Not incidentally, he leaves Howard before finishing his degree (the professor and company man in me cringes). But he’d found what he’d come looking for. The degree didn’t matter. Time to dig somewhere else.

The class where we’re reading BTWAM is about how the stories of others can bring you into deeper contact with others’ experience and how it differs from yours – and, thereby, to a deeper and more expansive “final narrative” about how the world works and what your place is in it.

So I asked the students: when in your life have you caught fire about something, like this? When have you found yourself consumed with knowing, regardless of what school or teacher or family requires of you; regardless of other demands? When did learning become something you couldn’t choose not to do?

One told of the thirty-page paper he assembled in third-grade about snakes, copying and pasting all he could find about them into his own document that no one asked him to write and that he turned in nowhere for credit. He’s here studying zoology; he’s going to spend his life with animals.

Another told of her experience at camp working with an autistic child whose parents didn’t understand him. She became consumed with learning how best to work with student with special needs, so she could fill a void in his life that needed to be filled. She’s here to become a speech therapist now; she’ll spend her life giving insight and skills to those who don’t have them that enable them to engage and change their world through their disabilities.

I scribbled a drawing on the board. First a big circle, trying to represent the unimaginable landscape of bullshit we are asked to do in school: how utterly remote from our actual desires and motivations almost all of it is. Then a smaller circle within it, trying to represent those few moments when what school asked us to think about actually rhymes with what we really wanted to understand; then, at the core, a small, tight circle, representing who we actually are, who we are compelled to become. And I drew a ray, a needle, that pierced the outer two realms and penetrated the core, like a needle in a microscopic in-vitro fertilization. “Like this?” I asked. This is what it looks like when you actually find the thing that you have to know about it because you can’t imagine not knowing? The learning that isn’t learning anymore but just an extension of who you are going to be today, like breathing?

Look how vast the bullshit is. Look how thin the needle.

How did we come to this? How, on the day we’ll select the next leader of the most powerful country in the free world, did we come to a place where the majority of us are going into the voting booth unencumbered by facts? Where we’ve become incapable of acknowledging, let alone hearing, realities that trouble our deepest motivations, which as always are mostly rooted in fear and therefore manifest as anger – “Build the wall!” –  as sure as gravity?

How, in an age when we each carry a supercomputer in our pockets, have we created a generation more flamboyantly incurious than any that have entered the university? A generation I exhort daily to go online to read about anyone or anything they encounter in the assigned reading that they don’t recognize – at least glimpse a Wikipedia page – and they don’t, as a rule,  more concerned about how their grade will be calculated?

And my question, intimately connected to these others, like a tumor grown into a previously healthy organ: when were these students last asked what they really want to know about, and given time and space to go find out? When did it matter, really matter?

When did school last pierce their heart?

My own formulation to explain Coates’ education:

What would our schools be if we used these principles to form how we spend the precious, extravagantly inefficient time that we share space and air and hours with our students?

So my screed today, among the thousands that will be loosed on the internet in our collective ritual of fear and loathing, isn’t about politics.

It’s about curiosity – the real thing, not the pale version on offer in most classrooms this morning. How you feel about the thing you think about when you’re supposed to be thinking about something else. The thing you really give a damn about, out beyond your own fear you won’t have enough or your kid won’t get into a great college or your grocery bill or your 401K.

I wonder: if we had spent more of the unaccountable expense that’s gone into the electorate’s education letting them answer the questions they had to answer, instead of the ones we could measure and manage, how much smarter would we be today? How much less likely to respond to hate mongering, manipulation, fact-free emotional appeals, jingoism, exploitation? How more likely to use our supercomputer tiny televisions for reading and listening instead of “me too!”-ing our own worst impulses?

The work is done, today, for better or worse. Like everything in education, the real results of our labor are almost entirely hidden, wholly inaccessible to standardized desires to assess and verify it. We’ll see today if we’re capable of thoughtful action rather than reflexive destruction of that we don’t understand: whether we’ve done enough of our own working in ambiguity to find our way through it without blowing up the whole project.

I hope so – but like Coates, I am too conscious of reality to go back to hiding in fantasy. We have failed our children, inasmuch as we have surgically disconnected them from themselves through a million state-sanctioned hours of stultification. We must change, and our institutions aren’t coming to help us.

Those of us trusted today with the luxury of hours with the young: how shall we support them in connecting who they really are to what they do? How can we countenance the outcomes if we don’t?

“Dr. Osmond, do you offer any more classes? I like the way you teach.” So a student said to me after that class yesterday. Maybe he caught a glimpse of what I had glimpsed: the awful stakes of what we require our youth to do. Maybe his core had been pierced, and he left more determined to do the only thing that mattered to him. I hope so.

God bless us everyone. See you on the other side.